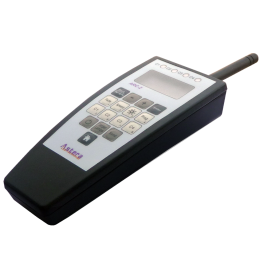 This product hasn't received any reviews yet. Be the first to review this product!

Here is a tutorial focusing on the basic start up functions on the ARC-2 remote www.wifiled.com

The ARC2 RF Remote Control is our standard handheld wireless controller. It is used to change colors, launch programs, group together several of our wireless lights, arrange lights within groups and control third-party products too. All that is needed is the ARC2 and our lights, no other transmitter/receiver devices are needed.

Astera’s Wireless LED Remote Control is the most advanced handheld LED controller on the market. After 2 years development and several revisions the product is able to control LED lamps in any possible way and provide ambience for any kind of event.  Just like a DMX controller, the Wireless LED Remote Control is able to address individual lamps as well as a several lamps together at the same time. By forming groups, sets or chains, the RF LED remote can synchronize a number of lamps to form complex lighting structures and lighting arrangements or distribute a fully controlled background illumination. Astera’s RF LED Remote Control can control anything from 1 individual lamp to thousands of lamps that are arranged in groups and sets.

Unlike other handheld LED Remotes the ARC2 is operating on the 868MHz band (USA version: 902-928MHz). This enables it to have a range of 300m in open field, while other Wireless LED Remote Controls only work up to 10m distance. The breakthrough for Astera was a technology that compresses the control protocol, transmits it to the lamps and unpacks it there, a method other companies simply cannot do at the moment.  For quick and easy event lighting the RF LED Remote has 24 pre-set programs that can be quickly launched. For more precise illumination, colors can be customized and new programs can be created and saved. A range of professional options like color-chaser, strobe-light, tap-sync, random effects etc can be set in addition. Please read the RF LED Remote’s handbook to find out about all the functions it features.

The wireless LED remote control can control Astera’s wireless lamps as well as a number of Astera’s architectural solutions. For lighting setups, the RF LED remote control can handle a mix of different Astera fixtures and recognize if they have one or multiple pixels. In addition by using the Wireless DMX Transmitter the ARC2 can control third-party DMX lamps as well, making it a truly universal wireless LED remote control.  Although the radio transmission is on a non-exclusive transmission path it is unlikely that the RF LED Remote will interfere or be interfered with other RF products. It is operating on a flexible band and can shift its wavelength slightly to avoid interferences. In case several ARC2 from different users are used in nearby sites, a radio PIN can be assigned and Astera’s Wireless LED Remote Control can be paired with a selection of lamps.

This product hasn't received any reviews yet. Be the first to review this product!